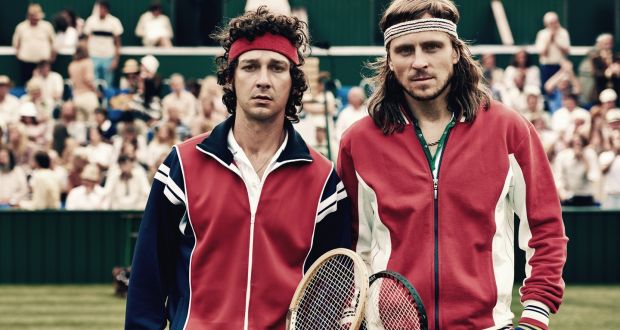 If there’s a list of the greatest tennis matches ever played, probably very high on it would be the 1980 Wimbledon final between John McEnroe and Bjorn Borg. More than just another match, it was the ultimate rivalry between two superstar athletes who on the surface couldn’t be more different. The fiery badboy McEnroe vs. Borg, the gentlemanly international superstar. The championship competition would live up to all of the hype, as does Janus Metz’s ace drama Borg vs McEnroe which goes against the grain of typical sports biopics.

Simply titled Borg in some overseas markets, the film is largely a psychological breakdown of the two tennis greats, with an emphasis on the good-looking, soft-spoken Swede. It’s the right choice to make because Borg (Sverrir Gudnason) is more of a cipher to those of us here in America, while McEnroe’s (Shia LaBeouf) hot-headed past has been public for decades. What you’ll be shocked, shocked I tell you, to discover is that for all of their apparent differences, McEnroe and Borg had a lot more in common than many knew but they could see for themselves.

Borg was tennis’ wunderkind going into that epic Wimbledon final, having won four straight championships and serving as an honorable ambassador of the sport. McEnroe on the other hand was a hated man, a ruffian upset the delicate sensibilities of tennis’ elitist audience. He mainstreamed the sport in ways that a lot of people in high places didn’t like. But he yearned to defeat Borg and replace the old guard, to take his place at the top of the food chain. Told through a variety of flashbacks that turn out to be fairly rote and familiar, we see that Borg wasn’t always the quiet, mannered knight he would grow up to be. He and McEnroe share a past of rebellion and questionable decision-making, all things that needed to be harnessed to make the most of their extraordinary talent.

Screenwriter Ronnie Sandahl emphasizes the diverging paths McEnroe and Borg would take from that point on.  Borg would find balance with the help of his longtime trainer (Stellan Skarsgard) and fiancée (Annihilation‘s Tuva Novotny), while McEnroe embraced the negative image the media eagerly pushed. Both could see they were being driven by outside forces to be enemies, but their obsessive desire to be the best would make them rivals no matter what. The confrontation was inevitable.

Shia LaBeouf is almost too perfect for the role of McEnroe, given his occasionally explosive demeanor and headline-grabbing antics that distract from his natural ability. Talent was never an issue for LaBeouf, either, the guy can act when properly motivated to do so and he has absolutely never been better. Those who doubt him because of the outside stuff will want to give this film a try. Gudnason, a dead wringer for the long-haired Borg, plays the tennis pro as a total contradiction, a rock star with the soul of a monk. While not as demonstrative as McEnroe, Borg’s competitiveness consumes every facet of his life, down to the tiniest detail.

Metz really hits his stride on the courts, giving the Wimbledon final the intense attention a match of its magnitude deserves. Beautifully shot and performed with ferocious athleticism, every serve, every volley, every split second decision is fueled by all that we’ve come to learn about these two ambitious players. It’s as the match winds down to the inevitable conclusion that the excessive backstory pays off. Borg vs McEnroe becomes something deeply personal and more than just a cinematic recreation of a classic tennis match you could just as easily watch on YouTube.