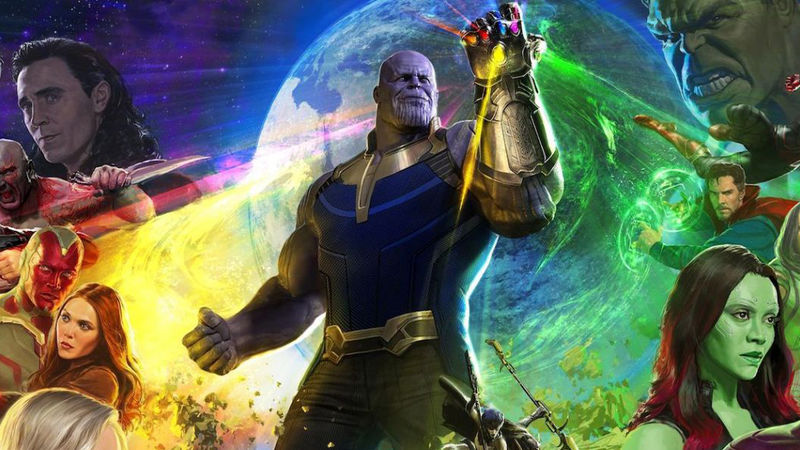 It may be odd to consider that Avengers: Infinity War, Marvel’s epic superhero jam they’ve been building up to for a decade, isn’t really an Avengers movie at all. They are in it, of course, and we’ve been speculating on which of them would make it out alive for months. But they aren’t what this movie is about at all. This movie completely, utterly, belongs to Josh Brolin’s warmongering villain Thanos, who has been teased since The Avengers all the way back in 2012.

That’s a lot of build for one bad guy so he better kick ass, right? Thanos delivers, in every way possible. While not as complex as Black Panther‘s Erik Killmonger, he’s not painfully thin and unimpressive like Ultron was. He is the perfect vessel with which the Marvel Cinematic Universe as we know it is destroyed and reshaped. Nothing that comes after him will be the same, and everything that came before him seems tame by comparison.

Chock-a-block with nearly two dozen characters, Infinity War is a tricky balancing act for directors James and Anthony Russo. They basically have two goals that must be accomplished: introduce the stakes, and keep Thanos looking invincible. They manage to pull off both with surprising ease given the humongous cast, while also keeping the tone light enough that we aren’t weighed down by the constant threat the heroes face. This movie is funny, especially when Thor and the Guardians of the Galaxy are around, but then Thanos shows up to remind you what they are supposed to be fighting for.

It’s all about the Infinity Stones, those colorful McGuffins that have been littering the MCU since the beginning. They’re not so pointless now; they are the most powerful objects in the universe and brought together they would give Thanos the ability to destroy the entire universe. But his goals aren’t as “simple” as that. Right from the beginning, after a surprisingly lean intro that speaks to the film’s serious tone, we learn that Thanos’ plan is rooted in nihilistic quasi-religious dogma that would see the universe remade in his image.

The maximum amount of juggling is necessary to completely capture the scope of Thanos’ scheme. There are five Infinity Stones left out there, two of which are on Earth, the rest scattered throughout space. We get an idea of how ruthless Thanos can be in the opening scene, a devastating display that is going to leave audiences stunned at the a destruction left in his wake. It’s Marvel’s way of saying “The gloves are off this time, kiddos”.

On Earth, Thanos sends his “children” the Black Order, all nearly as powerful as he, to find the Stones’ location. This naturally puts them at odds with the Avengers, who are in a state of disarray after the events of Captain America: Civil War.  Tony Stark (Robert Downey Jr.), Bruce Banner (Mark Ruffalo), Doctor Strange (Benedict Cumberbatch), Wong (Benedict Wong), and Spider-Man (Tom Holland) are the first Earthbound heroes to face the Black Order’s onslaught, which leaves Manhattan in ruins and the heroes backpedaling.  Meanwhile, Captain America (Chris Evans) has been off the grid with his team: Black Widow (Scarlett Johansson, really given a boost in this film) and Falcon (Anthony Mackie), but they answer the call when other teammates’ lives are threatened.

One of the most surprising aspects is how many Avengers get their own little story arcs to follow. While they all can’t share in the spotlight, Vision (Paul Bettany) and Scarlet Witch (Elizabeth Olsen) play a major role and see their relationship arrive in a place that comic book fans will recognize, but others may be taken aback by. As odd as the pairing might be they have the most emotional arc of them all, when before they were two of the most under-served characters.

The Russos, along with screenwriters Stephen McFeely and Christopher Markus, do a solid job of keeping the characters consistent and their continuity straight. For those who loved the new comedic Thor (Chris Hemsworth) seen in Thor: Ragnarok, you’ll be pleased at this version’s wisecracks alongside Rocket (Bradley Cooper) and sullen teenaged Groot (Vin Diesel). Black Panther fans also get a trip to Wakanda and the cool-as-Hell meeting between geniuses Bruce Banner and Shuri (Letitia Wright).  Seeing some of these characters paired up for the first time is a big part of the thrill and Infinity War’s massive appeal. Who doesn’t want to see Star-Lord (Chris Pratt) be a smartass to fellow smartass Tony Stark?

There’s so much going on that it can be daunting. The Avengers are basically split up four ways, meaning four story points to follow. Plus, you have Thanos and his story which intersects on a personal level with so many characters, especially in the Guardians. We dig deep into his past to learn the origin of his twisted philosophy; it’s almost like a biopic about the creation of a genocidal madman. And all the while there is still this “race-the-clock” momentum as the teams scramble to stop Thanos from touching down on Earth and slaughtering everybody. That’s okay, he does plenty of slaughtering along the way, and again, some of it is stunning.

While Thanos is the MVP his crew the Black Order aren’t quite as impressive. As a big fan of Cull Obsidian (known as Black Dwarf in the comics, they shouldn’t have changed the name) I was disappointed by the big man in this film. It’s also clear where the screenplay cuts corners to bring the Avengers together. It’s a necessary evil with so many characters to assemble, otherwise we’d be looking at a four hour movie.

Still, these are minor complaints for a superhero movie that had me on the edge of my seat from start to finish. I was both grinning with glee and terrified at the prospect that any of my favorite heroes could be killed off at any moment. Avengers: Infinity War is everything promised; it is a blockbuster spectacle shot up with adrenaline and when it’s over you’ll know the Marvel Universe will never be the same, and that makes the future tremendously exciting.