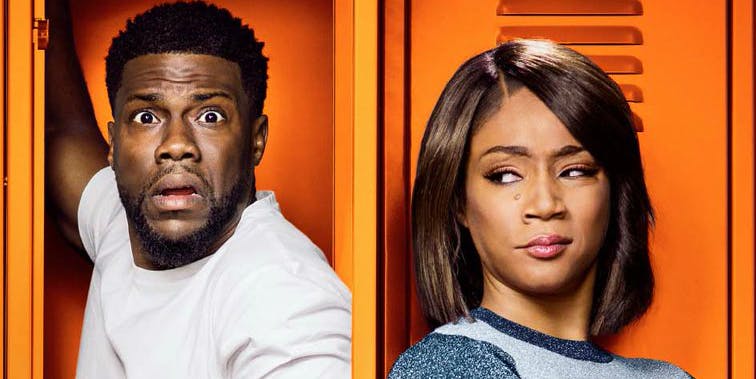 For most people all they’ll really need to hear about Night School are that it stars Kevin Hart and Tiffany Haddish. Hell, count me as one of those folks. There’s no denying the comic potential of such a duo. Hart is coming off the meteoric success of Jumanji: Welcome to the Jungle, while Haddish is red hot after Girls Trip, securing projects left and right. Now in the upcoming comedy’s first trailer we see the combination if literally explosive.

The premise is pretty simple. Hart plays a BBQ grill salesman who sees his favorite job go up in smoke, so he goes to night school to get his GED and land a high-paying financial gig. Haddish plays one of his teachers. The film reunites Haddish with Girls Trip director Malcolm D. Lee and super producer Will Packer, the latter also behind most of Hart’s biggest hits. Here’s the synopsis:

Star Kevin Hart and producer Will Packer, who partnered for the hit Ride Along and Think Like a Man series, bring their signature style to Night School. The comedy from director Malcolm D. Lee (Girls Trip) follows a group of misfits who are forced to attend adult classes in the longshot chance they’ll pass the GED exam. Co-stars Tiffany Haddish, Rob Riggle, Taran Killam and Romany Malco join Hart on-screen for the film that Hart produces for his Hartbeat Productions, and Packer via his Will Packer Productions.