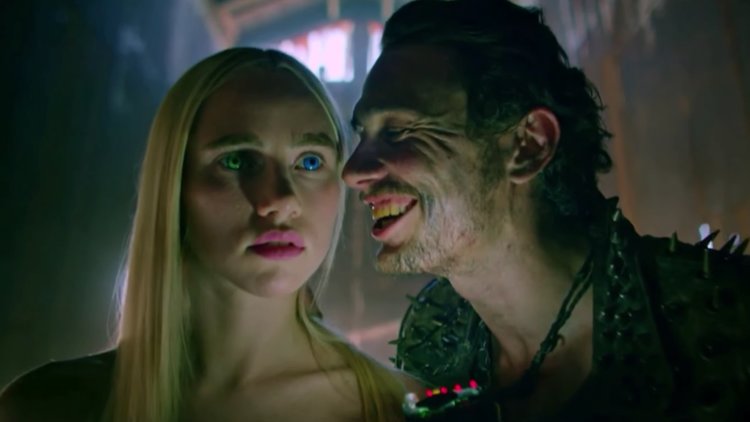 Future World! Sounds like an awesome place, right? Like maybe something out of Tomorrowland? Well, no. Future World is decidedly not awesome, looking like a very poor man’s version of Mad Max: Fury Road, only with James Franco, Snoop Dogg, Lucy Liu, and a cast of stars way better than this acting like they’ve accidentally wandered onto the set. Somehow this thing is an actual movie, although I doubt anybody is eager to add this to their resume.

Unsurprisingly the film is co-directed by Franco, whose list of under-the-radar directing credits is suspect as shit, and I think he does it only to lend some cred (such as it is) to the other filmmaker’s project. For instance, Future World‘s co-director is his frequent cinematographer Bruce Thierry Chung, who began casting this thing way back in 2016, although it looks like a relic from 30 years ago and not in a good way. It’s hard to tell what the Hell is actually going on here because everybody is cranked up to eleven, either screaming, acting maniacal for unclear reasons, or laughing hysterically also for unclear reasons.

Here’s the synopsis to hopefully make some sense out of this: A young boy’s mother is dying and beyond the capabilities of any local medicine. Desperate for an answer, the boy travels across the barren future world wasteland, scavenging for a cure that is only rumored to exist. His will and perseverance will be tested as he strives to protect his family.

Nope, that didn’t help. The film’s lead is Suki Waterhouse (The Bad Batch, Assassination Nation), an android who appears to be on the run from Franco, who looks like he just took a dirt bath. I’m guessing her character’s name is Ash because Franco randomly tells us “Her name’s Ash” while the trailer seems occupied with other things. Then a bunch of goons in masks show up, get stabbed, Milla Jojovich arrives, so does Snoop (clearly high as a kite), and then my brain shut down for repairs. The film also features appearances by Method Man and Margarita Levieva, who Franco must have hired directly from HBO’s The Deuce, and Scott Haze who is in every Franco movie.

Future World opens on May 25th. Not sure where but I’m guessing it won’t be there long.