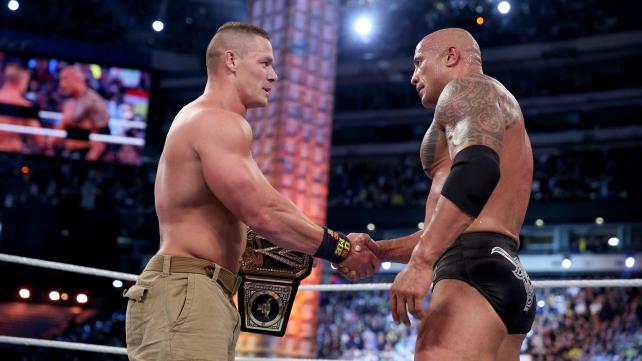 Dwayne “The Rock” Johnson and John Cena have had their share of beefs, which inevitably spilled over into the WWE ring and all the way to WrestleMania. But they’ve long since squashed all of that, and unlike Johnson’s feud with Vin Diesel they will definitely work together again. Johnson had been set to star in an adaptation of Robert Ludlum’s The Janson Directive, but due to his busy schedule that role is now going to Mr. Hustle Loyalty Respect himself.

Cena is in talks to lead the adaptation of the espionage novel by Ludlum, the author behind the Jason Bourne books. Johnson stays on board as a producer, giving his good friend a lift like he was setting him up for a “Rock Bottom”, only less painful I hope.  The story, penned by James Vanderbilt and Akiva Goldsman. Here’s the synopsis:

When billionaire philanthropist Peter Novak is kidnapped by a terrorist known as The Caliph, it’s up to Paul Janson?a legend in the notorious U.S. covert agency Consular Operations?to save him. But Janson’s rescue operation goes horribly wrong…and soon Janson is marked for death, the target of a “beyond salvage” order issued from the highest level of the government. Now Janson is running for his life, pursued by Jessica Kincaid, a young agent of astonishing ability who can anticipate and counter his every move. To survive, Janson must outrace a conspiracy that has gone beyond the control of its originators. To win, he must counter it with a conspiracy of his own…


This is a pretty big deal to have Johnson giving Cena such a major role, his first franchise to call his own since The Marine, which he ditched after one movie.  Cena has been killing it lately in everything from Sisters to The Wall to Blockers, and he’s earned this. I may not like his jorts-wearing character on WWE TV, but he works his ass off to improve at everything he does.  One of these days we’ll get the Johnson/Cena teamup movie we’re all dying to see (Or at least I’M dying to see it!) but for now this is a good start. [Variety]

Found my star! Congrats to my good bud John Cena on landing the lead role for our movie, THE JANSON DIRECTIVE. A project that myself, @sevenbucksprod, our production partners and Universal Studios have been developing for years now. Congrats man and I’m excited to go on this journey with you. Thank you for your commitment to the role and remember, as your producer if you screw up, I’m coming to set and droppin’ the People’s Elbow on ya. And you know first hand how devastating my elbow drops can be ??? Congrats my friend and let’s go make a good one. #JansonDirective #JohnCena #SevenBucksProds #CaptivateEnt #WeedRoadPics #MythologyEnt #UNIVERSAL
A post shared by therock (@therock) on Apr 30, 2018 at 2:07pm PDT