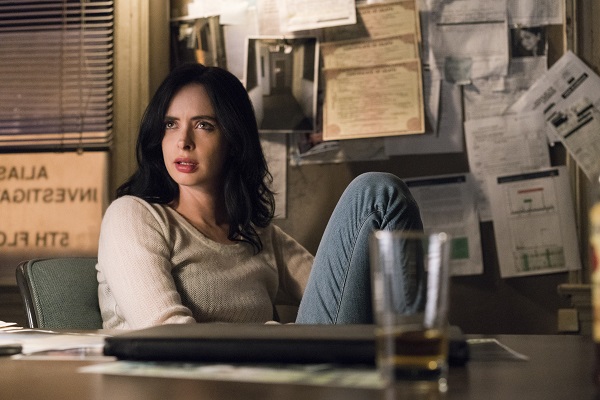 With the creation of the Marvel Netflix Universe (called the “Defenders Universe”), Marvel had the chance to not only showcase even more and newer heroes, this allowed them to showcase a different side of superheroes, somewhat darker.  This not only does that give us the PG-16 version of some Marvel characters, it also allowed some darker issues (many relevant today) to explore in a universe that is known for the “family friendly” Disney-owned world.  Daredevil showcases not only how the character deals with his disability as well as his Catholic faith goes with (and against) his vigilante activities.  Luke Cage dealt with a bullet-proof superhero in a Black Lives Matter world complete with police brutality, Black-On-Black crime, and an excessive use of the N-word (something one wouldn’t think of in the Marvel Universe).  Iron Fist showcased a billionaire and brought us to the world where “corporations are people” and boardrooms help finance the drug trade, as well as Danny Rand’s incessant privilege as a rich white man who can’t see beyond his billions, now forced to look at the rest of the world.

But Jessica Jones flipped the script in such a powerful way.  Jessica (played by Krysten Ritter) was a hard-drinking, badass superpowered private eye, who is dealing with a strong case of PTSD.  After breaking free of a supervillain named Killgrave, whose powers of suggestion forced her against her will to be his personal superpowered Barbie, she for forced against her will both sexually and emotionally, Jessica was a mess.  However, she continued on to try and live her life.  In addition to being able to break anything with her bare hands, she’s one hell of a private eye.  Through her Alias Investigations, she helped her clients, from those who needed to find a missing loved one, to spouses who needed to catch their cheating partners.  However, when Killgrave returns to terrorize the city, she decides she has to stop him to ensure he doesn’t do to any other woman what he did to her.  Not only did the first season of Jessica Jones give us one of the Marvel Universe’s most dynamic and outright evil villains in Killgrave, it also introduced us to Luke Cage, who went on to have his own series (which pretty much “broke” Netflix when it was released).  Comic fans knew that Jessica and Luke end up as one of Marvel’s power couples, so it was good for Jessica Jones to lay the groundwork for their eventual coupling.  With Jessica defeating Killgrave by the end of the first season, all seemed well, right?

Breaking the Netflix tradition of a Friday release for new shows, Jessica Jones instead was released this past Thursday coinciding with International Women’s Day (well played Netflix, well played), Jessica is continuing her life as a private eye.  However, after helping save the city in The Defenders along with her fellow superhero vigilantes, she’s somewhat of a local celebrity.  Jessica, ever the introvert, really doesn’t want the limelight, she just wants to solve cases and pay her bar tab.  While she seems OK, she still wonders about her own origin story.  As far as Jessica knows, she was in a car accident that killed the rest of her family, yet somehow, she survived and emerged with powers.  All she knows is that there is a company called IGH (briefly mentioned in the first season) is responsible for her predicament.  Her adoptive sister Trish, wanting to graduate from teen celebrity to local talk show host on to a serious investigative journalist (and also help Jessica uncover her past), starts investigating the company, which sets in motion a chain of events that leaves bodies all over the city.  Jessica is first approached by a super-powered individual named “Whizzer” who believes that someone is trying to kill him.  After his untimely demise, Jessica takes the case serious and starts to investigate IGH and what secrets they have.

Jessica’s investigations continues the noir tradition from the first season, as she shows methodically shows how Jessica can investigate and get from point a to point be in trying to solve her cases.  Everything from her using her superpowered skills, to just plain old “phishing” to get into places that would normally require a badge or a law degree to learn more about her case.  Her investigation into the company proves to be almost as traumatic as Killgrave’s mind controlling ordeal.  She is forced to relive the accident that killed the rest of her family forced her to have survivor’s guilt.  Meanwhile, it’s not IGH that Jessica has to deal with, the company, mainly it’s the main doctor Dr. Karl Malus’ (Callum Keith Rennie) genetic creation dubbed “The Killer”, who is going around dropping bodies left and right.  The Killer is also hyper-powered, even more than Jessica Jones which proves to be a physical and emotional problem for Jessica. 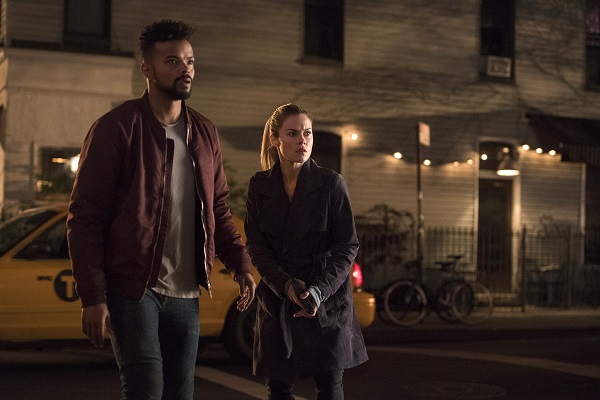 All of the main players from season one return as well.  Jessica’s adoptive sister Trish (Rachael Taylor) plays a larger role and she pretty much kick-starts the events of this season.  Still stuck in the celebrity shadow of playing “Patsy” and despite being the talk show radio host of “Trish Talk,” she wants to be taken more seriously and does some investigation into IGH on her own.  Accompanying her as well as Jessica’s assistant/punching bag Malcolm (Eka Darville), who is given much more to do this season.  Malcolm spent most of season one as a heroin addict thanks to Kilgrave’s mental manipulations.  This season though, he’s clean and wanting to make a difference, so he’s working at Alias Investigations as Jessica’s assistant/associate.  He also works with Trish on her investigations as well.  He identifies with Trish because both of them are addicts: his vice was heroin, and Trish as a teen star had a cocaine problem we see via flashbacks, as well as a new addiction this season which has disastrous/beneficial results for her.  Also returning is cutthroat attorney Jeri Hogarth (Carrie-Anne Moss).  This season, despite her and Jessica ending on semi-bad terms, need each other as Jerri learns she has a disability that threatens her lifestyle and Jessica needs her help with the IGH investigation.  Carrie-Anne Moss showcases her vulnerability as well as her ice-cold nerves of steel throughout the season.  New to the season in Jessica’s apartment super Oscar (J. R. Ramirez) who starts off hating her because she’s “powered,” but the two become intertwined and start to fall for each other.  That shipping for Jessica and Luke to go out for “coffee” will have to wait a little while. 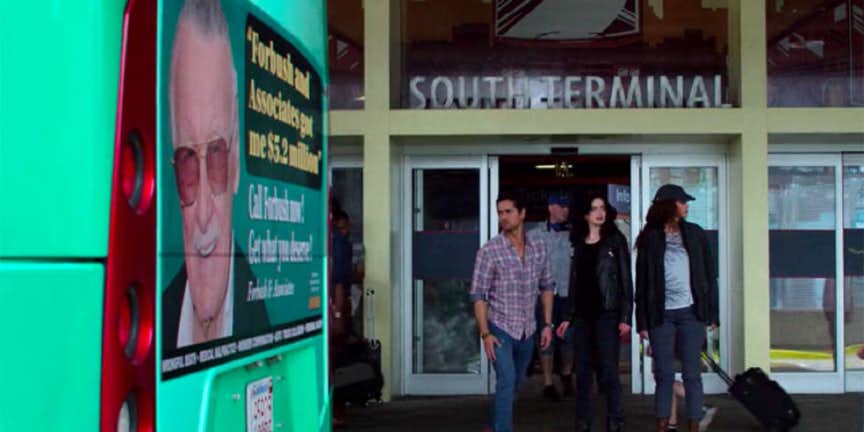 This being a Marvel TV show, it’s loaded with Easter Eggs connecting to the Marvel Cinematic Universe as a whole.  While Marvel Studios and Marvel TV have been operating separately for quite some time, that doesn’t mean there are some interesting callbacks to both the comics as well as the MCU at large.  Whizzer, the fear-based speedster is a reference to one of Marvel’s Flash ripoffs from the 1940s.  Jerri continues to name drop that Rand Industries is her biggest client.  We even get a cameo from Daredevil’s Foggy, who still works for Jerri.  Oscar’s son references his Captain America toy losing his shield and makes a new one for him, referencing what happened in Captain America: Civil War.  Of course, we get our Stan Lee picture cameo as well.  The biggest MCU reference is to “The Raft.”  In Captain America: Civil War we are introduced to a superpowered prison that members of #teamcap end up at called The Raft.  This season, The Raft is mentioned multiple times as a place where criminals with powers end up if convicted of crimes.

While the second season was a worthy successor to the stellar first season, lacking a primary antagonist was noticed.  Last season we had Killgrave, who was charismatic and terrifying at the same time.  This season operated like a season of 24 or the first season of Luke Cage where we had one villain half the time, and then a new villain halfway through.  When The Killer is revealed, the show makes a C-change that may alienate some fans, the same way the first season of Luke Cage did after the death of Cottonmouth and the ascendance of Black Mariah.  Not spoiling who The Killer is, but it has emotional repercussions for Jessica.  While we thought that Will Simpson, AKA “Nuke” would return to be the show’s primary villain after his role in season one, his return is short this season, but does work for the overall plot.  Fear, not Killgrave fans, David Tennant returns for a few episodes, despite being killed at the end of season one as a figment of Jessica’s imagination and Tennant chews as much scenery as he possibly can.

The second season of Jessica Jones has the same level of magic as the first season, thanks in part to Krysten Ritter giving her all for the role.  While comic book show/movies don’t garner many awards, don’t be surprised if she at least gets an Emmy nomination as she goes through the motions and brings her A-game to the role acting wise.  Showrunner Melissa Rosenberg and her all-female writers and directors shows that representation matters in delivering a product as the voices behind each episode consistently shined thanks to the production crews skills as perspectives.  Marvel once again proves that their TV can compete with their big screen counterparts just as well.