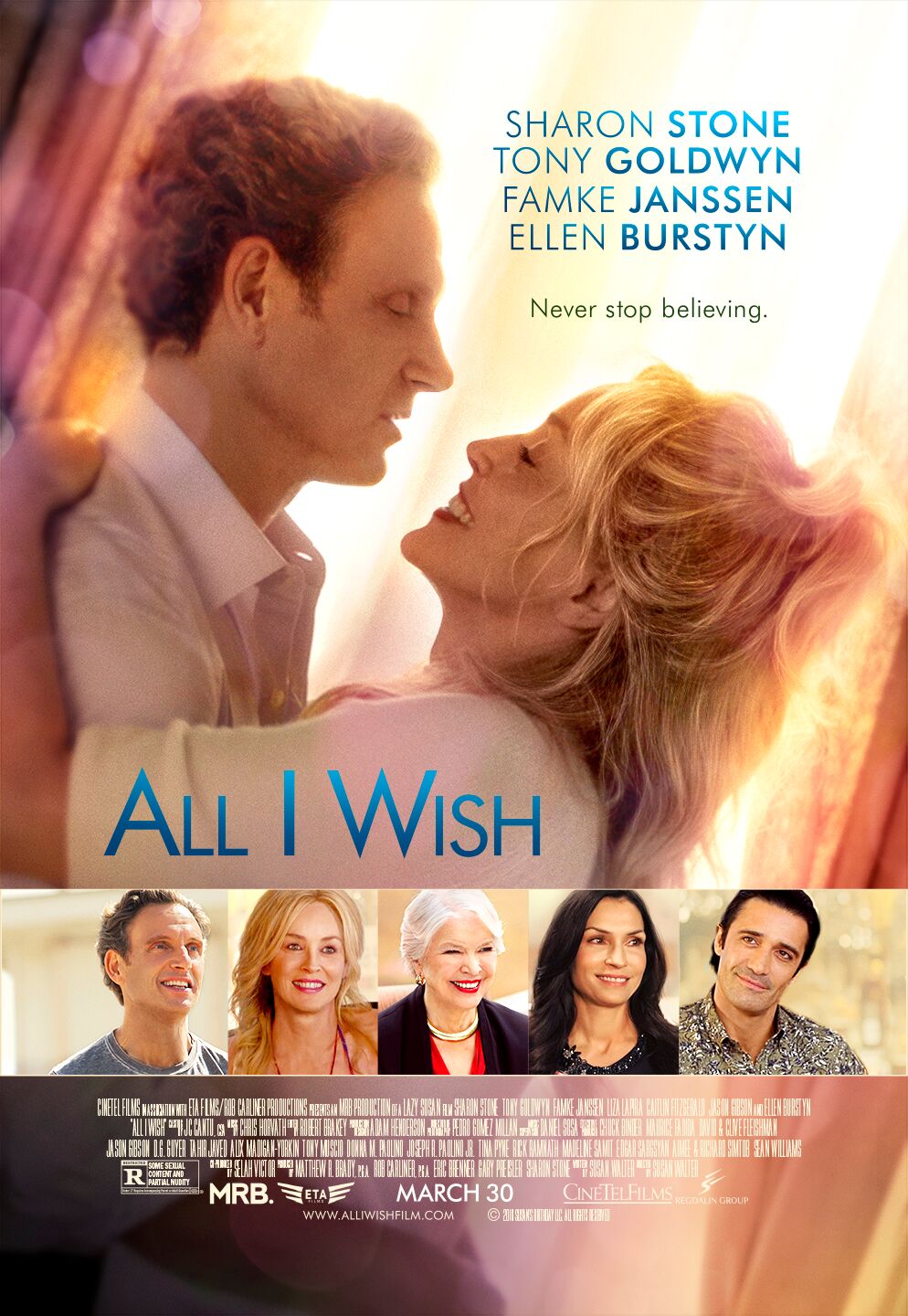 All I Wish is a romantic comedy about a 46 year old woman named Senna, played by Sharon Stone, whose life didn’t really turn out the way she had expected. Her love life seems to be more defined by casual hookups rather than having that someone to spend the rest of her life with and her career as a fashion designer has relegated her to retail work. This movie follows her journey every year on her birthday as we get a one-day peak into her life, career, and relationships with friends, her mother, played by Ellen Burstyn, and her love interest, played by Tony Goldwyn.

One would think that with a cast like that that we would get more than a lukewarm romantic comedy, with bad pacing, generic background restaurant music, unfunny gags, and obvious potholes, but no. I see what it is that the filmmaker was trying to do by showcasing universal themes like a non-thriving love life, not being where you want to be in your career, and relationships with parents in a middle-aged woman, someone, who by society’s standards should have it figured out by now, but the entire effort honestly just falls flat.

I think that the plot structure of dropping us into her life everyday on her birthday works against the movie more than helps it. Though, the acting itself isn’t the problem; I think that everyone does a decent job of bringing their respective characters, their quirks, and flaws to life, where the disconnect happens is in our relationship with these characters. Nothing is really ever built up to where we would even think to feel for them when things aren’t going their way or root for them when they are. It is kind of difficult to care for these characters when we’re not really shown why it is that we should care in the first place; we’re kind of just thrown into their story after the important moments happen that would help to put things into perspective for us.

This movie also decided to go for a documentary/interview feel with the characters being in front of a black backdrop and answering questions where by the end of it made entirely no sense. As you’re watching these scenes play out in the movie, initially you might infer that at some point the story will take a turn to reveal that perhaps, Senna, was creating some kind of project that was geared toward women or people like her that are in the same kind of slump; like maybe it could be some kind of empowerment mechanism. Though, the story itself never unfolds to where this idea is even plausible, it was the most that I could come up with seeing as though I was never able to understand the point of  including it in the movie in the first place, outside of maybe as a way to lessen the impact of the various potholes that the movie had.

This is one those romantic comedies where going into without any kind of expectation, helps for your overall experience, but really does nothing to mask that this movie just isn’t that good. I get that the genre of romantic comedies isn’t the most prestigious of genres, but at the same time I don’t see that as being an excuse for making a movie, especially with that kind of cast, turn out to be as flat as it was. I did expect a little better.