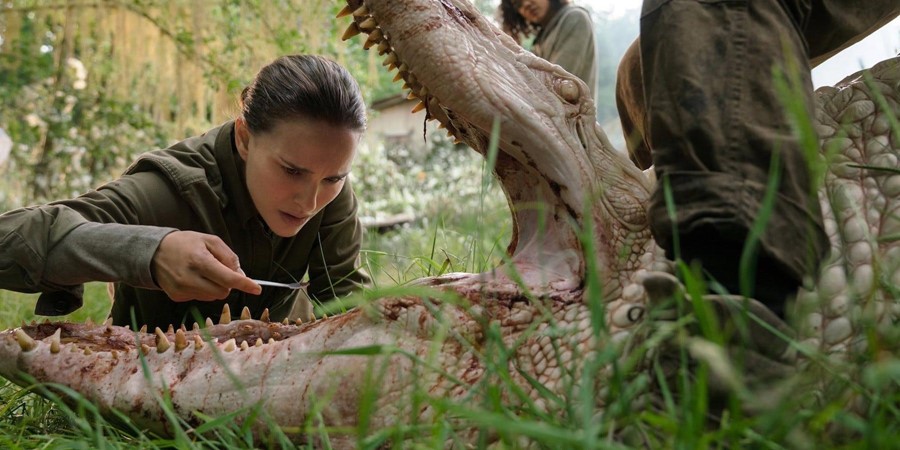 Alex Garland is probably best known for his work writing for Danny Boyle on films such as Sunshine and 28 Days Later, followed later by scripts for Never Let Me Go and Dredd. But it was his extraordinary directorial debut Ex Machina that not only solidified him as a creative force, it also brought into focus his nihilistic view of humanity. In virtually all of his films humanity sits on the razor’s edge as a few flawed people fight against an oncoming doom that is completely out of their control. So it’s no wonder that he would gravitate to Annihilation, based on the first book in Jeff VanderMeer’s “Southern Reach” trilogy. Gorgeous, unnerving, and utterly brilliant, Annihilation will scare the crap out of you just as much as it will make you think.

Owing a lot to classic horrors such as The Thing, Invasion of the Body Snatchers, and definitely Alien, the film probably best resembles a more recent acclaimed entry to the sci-fi genre: Arrival. What I loved most about that Oscar-nominated film was that it had me curious about the extraterrestrials’ motivations and their culture. I was just as riveted by Area X, the mysterious, seemingly supernatural realm that exists beyond the Shimmer, which is exactly what it sounds like. Natalie Portman is Lena, a biologist leading a squad of badass female scientists through The Shimmer to investigate the phenomenon. Three years earlier, a meteor crashed into a lighthouse and became ground zero for some paranormal force that is quickly spreading. The film begins cross-cutting from the modern day as Lena explains to her students about the nature of cell division, to a year earlier during happier times with her husband, Kane (Oscar Isaac), part of the last team of soldiers to enter Area X, never to return. Then one day he returns seemingly from out of nowhere, but he is not the man she remembers. Far from it.

Lena’s natural curiosity has her joining with a team of other women to enter Area X and discover the truth behind the phenomenon, in an effort to help her husband. She’s joined by inscrutable team leader Dr. Ventress (Jennifer Jason Leigh), cocky paramedic Anya (Gina Rodriguez), intuitive physicist Josie (Tessa Thompson), and thoughtful geologist Cass Shepherd (Tuva Novotny). Their mission is to reach the lighthouse, but getting there won’t be easy. Beyond the Shimmer, the laws of physics and logic simply don’t apply. Strange mutations have affected the entire region, turning it into a twisted rainbow rainforest where the vegetation and wildlife have been transformed.  What’s captivating about it is that some of the mutations are completely benign and even beautiful. Others, like a giant crocodile-like creature that attacks early on, could be what killed all of the previous expeditions.

The film is simply plotted; the women need to reach their destination and then return home, but its the complexities within them that are fascinating.

“We are all broken women,”, Shepherd tells Lena during a quiet moment. It’s true. All of them are searching for something or trying to cope with a darkness in their souls. For Cass, she’s coming to grips with the truth about her relationship with Kane, which is more complicated than she lets on. But there are bigger concerns, like the true nature of the threat they face. Is this phenomenon extraterrestrial in nature? And if so, what is it trying to accomplish? The more we learn, the dread builds until it’s almost unbearable. Garland builds up the tension slowly, perhaps too slowly for some, and puts us right there in the unknown with Lena and her squad. There are as many revelations as there are questions, each more fascinating than the last and more than enough to keep you on the edge of your seat.

Portman gets the heaviest emotional lifting, of course, and it’s a little disappointing that there isn’t more for her equally-talented co-stars to do. But they are all solid with what they’re given to work with, it’s just this is a film with a screenplay that must keep a certain amount of distance. To reveal too much, about Area X or the people exploring it, would crumble the foundation of cerebral sci-fi and human drama that Annihilation rests so perfectly on.