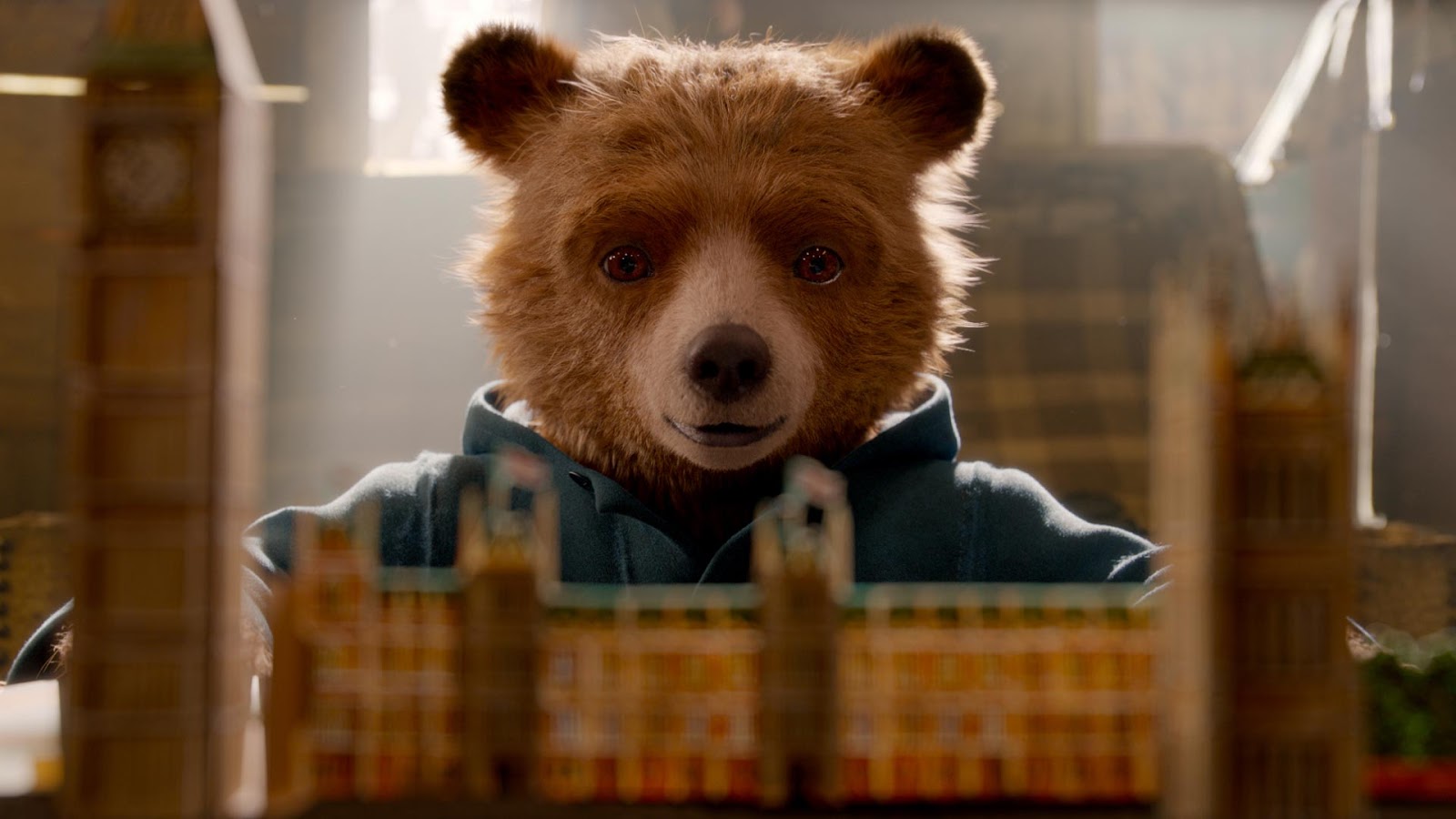 Can we have every year start off with a Paddington movie? The world would be a much nicer place, I think. In early 2015, Michael Bond’s lovable bear with the marmalade obsession charmed us all in a film that overflowed with sweetness, kindness, and adventure. Now a few years later and director Paul King has delivered to us a sequel that steals our hearts just as easily. If ever there’s a need for a Paddington cinematic universe or something, anything to keep the franchise going as long as possible, then Paddington 2 is it.

Quietly, the Paddington films have some of the most gorgeous production design of any animated movie in recent years. Brightly-colored, literally popping off the screen with Wes Anderson-like pastels, Paddington 2 zips us into a pop-up book version of London. It’s there that we find Paddington, happily fitting into the life of the Browns who have made him a part of their family. But more than that, Paddington has been accepted by the town as a whole. His presence makes everything just run better, smoother, and happier.

“If you’re kind and polite, the world will be right”

It’s a lesson often repeated as Paddington (again voiced by Ben Whishaw) makes his way through a series of light misadventures involving those who aren’t so kind and definitely aren’t polite. But the message has its origin from Paddington’s Aunt Lucy (voiced by Imelda Staunton), who we see in flashback rescuing a very young Paddington from a watery doom. Many bear years later and her birthday has arrived, and Paddington hopes to gift her with a very special “popping book” found in an antique shop. It’s his way of showing the bear who raised him a little bit of London, since she never had the chance to go herself.

Yeah, those are the stakes. Paddington needs to get that book, and he starts by working odd jobs that go disastrously at first, like cleaning a barber shop (haircut nightmare) or washing windows. Just as he’s a day away from having enough to buy it, *POOF!* it’s gone, stolen away by nefarious washed-up actor Phoenix Buchanan, played with gusto by Hugh Grant.

I’m telling you, the folks at Marvel and DC should call the Paddington folks about creating great villains. I’d take Phoenix Buchanan over Ultron or Steppenwolf any day. Not only does Phoenix steal away with the book, but Hugh Grant steal away every scene he’s in. A master of disguise who does everything with a theatrical flourish, Phoenix is like the long-lost cousin of Lemony Snicket’s Count Olaf. Grant is having way more fun than everybody, and everybody looks to be having a darn good time. Phoenix is basically the polar opposite of everything Paddington stands for; he’s the perfect villain to highlight why Bond’s creation has endured for more than 50 years and entertained millions.

Not that we mind spending more time with Paddington and the Browns, it does take a little while for the plot to kick into gear. After a rousing Tintin-esque chase through London’s streets, Paddington is framed for the book’s theft and sent to prison, where the film somehow becomes an even greater delight. Think of kindly, sweet-natured Paddington in a prison full of hardened criminals, only to have him mess up the laundry and turn everything pink. Think of innocently naïve Paddington running afoul of the prison chef, Knuckles (Brendan Gleeson), only to win over over his heart and taste buds with a well-timed marmalade sandwich.  Pink-hued prison musical numbers and daring escapes are soon to follow. Somehow this diversion into Cell Block Fun remains both kid-friendly and entertaining to adults just looking for a good time. It gets a little messy following Paddington’s exploits behind bars (making hundreds of marmalade sandwiches is tough!), the efforts of the Brown family to clear his name, and a convoluted walk through Phoenix’s family history, but these are such enjoyable characters to be around that it hardly matters. The Browns, led by the great Sally Hawkins as the thrill-seeking Mrs. Brown, are a quirky complement to Paddington. But I think Gleeson really shines in the kind of role he’s always been good at, that of the bruiser with a heart of gold.

Then again, everybody has a heart of gold when Paddington is around.  His generosity and caring nature are infectious, and so is Paddington 2 for anyone looking to start their year feeling a little better about the world.