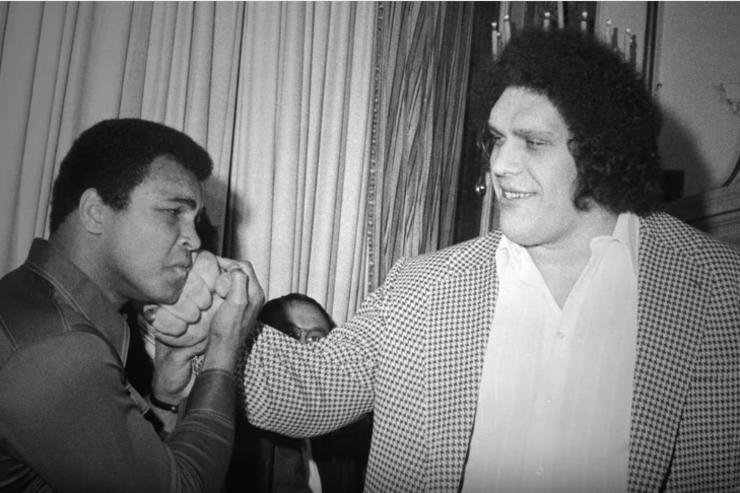 HBO, WWE, and the Bill Simmons Media Group released the trailer for their upcoming Andre the Giant documentary, and it truly looks fitting for the Eighth Wonder of the World. Billed at 7’4″ and more than 520lbs, the man born Andre Rene Roussimoff was a true giant of the sport of professional…”He did sports entertainment before there was sports entertainment” his friend and occasional nemesis Hulk Hogan says at one point, and nothing could be more accurate.

The film will go inside his remarkable in-ring career, in which he spent nearly a decade with an undefeated record, and some of his most famous rivalries with Hogan, “Macho Man” Randy Savage, King Kong Bundy and more. But it also looks at his life and career outside of the ring, from the movies, the commercials, rubbing shoulders with celebrities, and how being in the spotlight took a toll on him. Because of his size Andre was always the center attraction wherever he went, and the physical pain caused by his gigantism soon made it difficult to put on a happy front. Two months after his death in 1993 Andre became the first inductee into the WWE Hall of Fame, and there is the annual Andre the Giant Memorial Battle Royale created in his honor.

Some of my earliest memories as a wrestling fan centered around Andre the Giant. His classic WrestleMania match with Hulk Hogan is obviously burned into my memory, but also watching him wrestle Big John Studd at the Capital Centre in what I think was my first live event. I’ll be tuning into this for sure.

HBO will premiere Andre the Giant on April 10th.