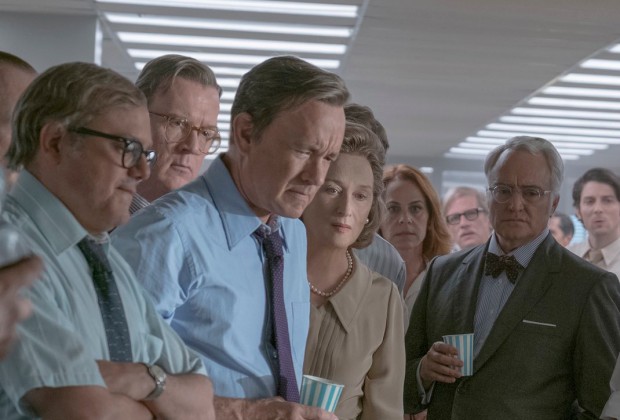 1. Jumanji: Welcome to the Jungle– $27M/$283.1M
At $283M domestic, Jumanji: Welcome to the Jungle just became the highest-grossing Christmas release of all-time. I bet nobody could have predicted that.
2. The Post (review)- $18.6M/$23M
Steven Spielberg’s Pentagon Papers drama The Post finally expanded into national release after four weeks, earning $18.6M in the process. The Steven Spielberg/Meryl Streep film has been doing well in platform for a while, and looks to do better now as Oscar buzz swirls. Just when I thought audiences were tired of movies that remind us how screwed up things are right now (ala Detroit), the performance of The Post shuts me up.
3. The Commuter (review)- $13.4M
Liam Neeson and director Jaume Collet-Serra partnered up for the 15th time (give or take), this time for The Commuter, yet another generic action movie with everyone’s favorite geriatric lead. My snark aside, the film got off to a relatively decent start with $13.4M through the weekend, which is right on track with their previous efforts such as Run All Night, Non-Stop, and Unknown.
4. Insidious: The Last Key– $12.1M/$48.3M
5. The Greatest Showman– $11.8M/$94.5M
6. Star Wars: The Last Jedi– $11.2M/$591.5M
7. Paddington 2 (review)- $10.6M
I’m disappointed, America. The sweet, charming, unmissable Paddington 2 opened with a scant $10.6M. The irresistible sequel to 2015’s $260M worldwide hit is just as wonderful as its predecessor, but will come nowhere near the same numbers. Fortunately, the marmalade loving bear remains a force internationally with $125M to date, which should comfort Warner Bros. who rescued the film from Weinstein limbo for a hefty $30M price tag.
8. Proud Mary (review)- $10M
Let’s keep it real: every dollar of the $10M earned by the lousy assassin flick Proud Mary is owed to Taraji P. Henson. Her fan base, which is extensive and much deserving, showed up to support what was teased as her big coming out party as an action star. The film is completely terrible, though, which is why Sony decided to hide it from critics who would have eviscerated it.
9. Pitch Perfect 3– $5.6M/$94.6M
10. Darkest Hour– $4.5M/$35.7M