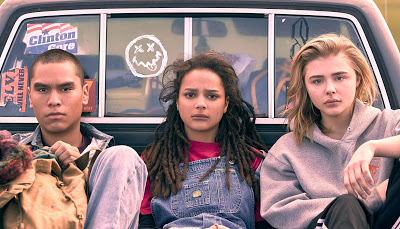 The 2018 Sundance Film Festival has come to a close, and I’ll be honest with you…I don’t think there was an obvious Oscar contender in the bunch. Granted, I didn’t see everything, but from what I saw and took in from others this was a pretty weak lineup. And I think that’s reflected in the lack of major acquisitions this year.

That said, the end of the festival means it’s time to hand out the Audience and Jury Awards.  Picking up the Grand Jury Prize was Desiree Akhavan’s The Miseducation of Cameron Post starring Chloe Grace Moretz and Sasha Lane, a film that I completely missed out on.  The Audience Award went to the race-based drama Burden, which I lambasted in my review. So there’s that.  I heard a ton about Three Identical Strangers, so it doesn’t surprise me it won for Storytelling, and John Cho’s Search cleaned up in the special categories. That one got picked up and it may be the most talked-about movie from the festival because of its computer screen-centered premise.  Finally, Reed Morano’s excellent I Think We’re Alone Now got some love, as well.

Full list of winners below, plus links to reviews of the films I caught.

Audience Award: “This Is Home”

NEXT Innovator Award: (tie) “Night Comes On” and “We the Animals”