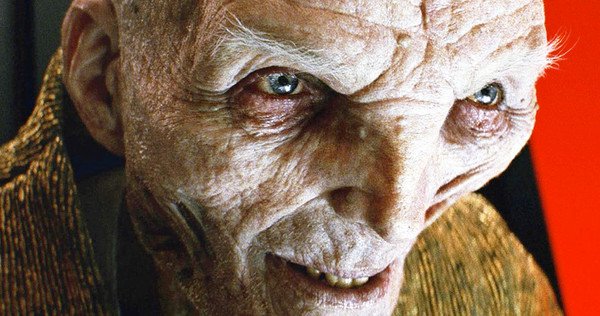 Hey, it says SPOILERS right there in the headline, so if you’re still reading then obviously you’ve already seen Star Wars: The Last Jedi. There will be no mercy shown here to fools you keep going forward.

I spent all of last week talking about the many great things Rian Johnson did in Star Wars: The Last Jedi, but what really stuck out to me was his handling of the major “mysteries” that have been racking fans’ brains for two year. One of those was the mystery of who Snoke really was. From the moment we enter his red room, with Rey captured and a conflicted Kylo Ren, parallels to the confrontation between Luke, Vader, and Palpatine are unavoidable. And with that come obvious expectations, expectations which Johnson tossed aside with the flick of a lightsaber switch, and the prompt dissection of Snoke.

That he died in such a dismissive fashion with no reveal about his backstory has led to some calling him a disappointing villain. I even thought so the first time I saw the movie, but came to see Snoke’s death quite differently upon a second viewing. But what was Johnson thinking about when he made the decision to pull the trigger on that scene? At a recent Q&A captured by EW, he says he came to a point where it just made sense to move the story forward and focus on the more interesting character, which was Kylo Ren…

When I was working on the character of Kylo, I came to a place where I thought the most interesting thing would be to knock the shaky foundation out from under him at the beginning of this movie…By the end of this film, he’s gone from being a wannabe Vader to someone who is standing on his own feet as a complex villain taking the reins.”

“But then the question is: What place would Snoke have at the end of that?…That made me realize the most interesting thing would be to eliminate that dynamic between the ‘emperor’ and pupil, so that all bets are off going into the next one. That also led to the possibility of this dramatic turn in the middle, which could also be a really powerful connection point between Kylo and Rey.”

I bet J.J. Abrams is like, “Dude! You didn’t leave me anything left to do!”  Seriously, I’ve always been a fan of The Sopranos’ approach to finales, which is to have the big stuff happen in the penultimate chapter, so you can deal with the fallout next. I’m really curious to see what Abrams does with Episode 9, and if he rolls back anything Johnson has done.