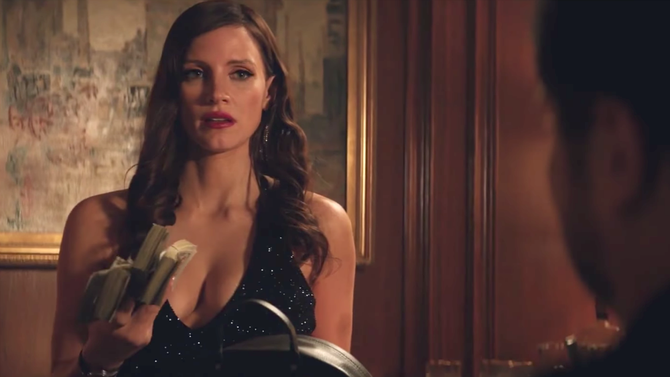 Aaron Sorkin loves a story about those willing to challenge the system. Of course, they’re usually men, deeply troubled, unconventionally brilliant gents who wear their hearts on their sleeves and are never more than a second or two away from a quick-witted quip. We’ve seen Sorkin detail the stories of men who have challenged everything from Major League Baseball (Moneyball), to the news media (The Newsroom), to the Internet (The Social Network), but for his first time behind the camera his attention has turned towards a woman, his first time really giving voice to a female lead character. Despite that, Molly’s Game falls squarely into Sorkin’s wheelhouse, his dialogue razor sharp as ever, even when his inexperience shows he has room to grow as a director.

Doubtful you’ll be thinking about Sorkin’s directorial fingerprint too much, though, because Jessica Chastain is captivating as the real-life Molly Bloom. A highly-intelligent Olympic level skier, the film opens in flashback as her shot at gold goes bust over an ugly freak accident. To Molly, airing her thoughts on ever-present voiceover, the moment was totally random and has nothing to do with her future fall from grace. Okay yeah, sure, you keep thinking that.

Cut to the present and Molly still hasn’t really picked up the pieces; rather than going to law school like everyone expects, she’s nickel and diming rich scumbags at sleazy bars, serving drinks and acting as assistant to Dean Keith (Jeremy Strong), a Hollywood-adjacent with a Rolodex full of wealthy, famous friends who come to his crib for a weekly poker match. There, Molly begins to find her niche. She knows nothing about poker, but she knows people, and soon she’s got the room figured out. While helping Dean run the game she quietly begins to build her own power base from the players within it, starting with the mysterious Hollywood actor Player X (Michael Cera), who readily admits “I’m not here to win, I’m here to destroy lives”.

She’s definitely swimming in some shark infested waters, so when Dean eventually moves to assert his authority over her, Molly strikes out on her own, taking his clients along with her. It’s like the poker version of Tom Cruise’s walkout scene in Jerry Maguire, only not really because there’s a lot more money at stake. Molly classes up the games considerably, makes them more exclusive, raises the stakes, and soon she’s got the hottest game in town. Her combination of hands-off sex appeal, commanding authority, and shrewd people skills make Molly the queen ruling over her own little poker empire. But of course, a bunch of power-hungry dudes are the ones to send it all tumbling down, and before long Molly is in the crosshairs of the FBI on a racketeering charge. That’s what happens when some of your clientele are Russian mobsters.

So what Sorkin wants us to ponder is why this woman, who has excelled at everything and has a bright future ahead doing whatever she wants, decided to cater to degenerates and criminals. Was it just for the money? The fame? Is she a bad person or just someone who made a few mistakes? Sorkin teases out the answer in a series of scenes with Molly and her new lawyer Charlie Jaffey (Idris Elba), who is perplexed by that question, too. Molly isn’t forthcoming with an answer, though, not until it’s convenient as a story-telling device. Sorkin may have banked a little too much on that mystery’s appeal, though. We already know Molly isn’t terrible and taking advantage of people the way Player X and other men in her life do. We see who she really is through her interactions with the number of colorful supporting characters Sorkin brings to life. It’s something Sorkin has always had a knack for and Molly’s Game is no different; Chris O’Dowd as the worrisome drunken Irishman who thinks he’s in love with Molly (most of the men think they love her), or Bill Camp as the veteran cardsharp who goes into an unexpected tailspin, or Brian d’Arcy James as a hedge fund manager and perpetual loser. All of these characters add color to what becomes stale and repetitive after a while. Even with Sorkin’s machine gun dialogue zipping by there’s a decided lack of forward momentum, especially for a movie clocking in at well over two hours. Sorkin seems to be trying to do a little too much, combining courtroom thriller, rags-to-riches story, and family drama with the arrival of Molly’s demanding father, played by Kevin Costner. While we can’t expect him to be Danny Boyle, David Fincher, or even Bennett Miller, Sorkin is clearly still finding his directorial style. He uses plenty of quick transitions and cool edits but they don’t always feel organic, like he was aping the style of directors he’s worked with in the past. I suspect in the future we’ll see Sorkin define his technique more sharply.

This isn’t necessarily a movie about poker. Moneyball wasn’t about baseball and Steve Jobs wasn’t about IPods, either.  It’s about gambling, yes, but not by anybody sitting at the table. It’s a character study of a fearless woman who dared to strike out on her own and faced the full power of male anger, not to mention the U.S. government, against her for doing that. Molly’s Game is in top form when the focus can be narrowed to her fight against the male-dominated establishment, and how she learned to always deal herself a winning hand.