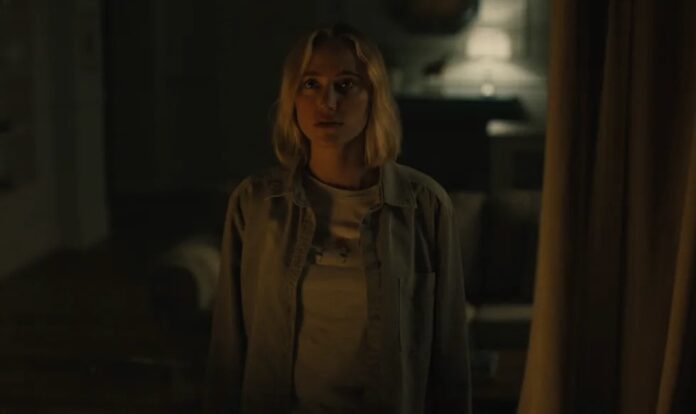 Do you always feel like somebody’s watching you? Well, hopefully not, but unfortunately for Maika Monroe’s character Julia in Chloe Okuno‘s brand new horror-thriller Watcher, she feels as if there is. It all begins when, one night while relaxing in her apartment, she notices what appears to be a mysterious stranger spying on her from across the street.

However, Julia quickly realizes that this strange person only appears to be watching her at night. In one scene early on, she talks to her boyfriend about her obviously scary situation, at which point he asks her where the stranger is watching her from, but whenever she points to it, she is a little surprised to see just how empty the window now looks during the day.

The fear and paranoia don’t take long to settle in. She can’t even go to watch a movie in the theatre without feeling as if one of the other audience members is that person. She can’t even go shopping without feeling the same way. Sure, it may be a big city, so what are the odds that the stranger is at the theatre or the grocery store at the same time as her? Probably unlikely… but maybe not.

This is where Watcher shines best. It’s at its most intense and unsettling whenever it shows just how fearful Julia is, because it shows that whenever you’re truly afraid of something, it’s basically all you can think about. A once ordinary life has now been flipped on its head, and you can’t erase these terrifying thoughts until you know for certain that this fear is unfounded.

Sadly, at times, Watcher can suffer from some poor pacing. There are more than few scenes in which I couldn’t help but feel as though nothing of importance was going on. There’s thankfully not a lot of exposition here, but there are pointless scenes of characters simply blabbing to each other that really add no substance to the story.

But when the film tries to be legitimately creepy and unnerving and fully commits to it, it works extremely well. The cinematography by Benjamin Kirk Nielsen and Okuno’s direction work hand in hand here. Also, the editing by Michael Block helps make the film feel a little jarring.

Maika Monroe also delivers one hell of a performance as Julia. Whenever the script calls for her to show extreme emotion, she makes it look incredibly easy. It’s so nice to see Monroe in another horror movie following her outstanding work in 2014’s It Follows, and one can only hope she gets even more great horror roles down the road.

Overall, despite some pacing issues and some pointless scenes that don’t add anything of substance to the overall plot, Chloe Okuno’s Watcher is a solid horror-thriller that’s at its best when it explores the fear and paranoia of our lead protagonist.