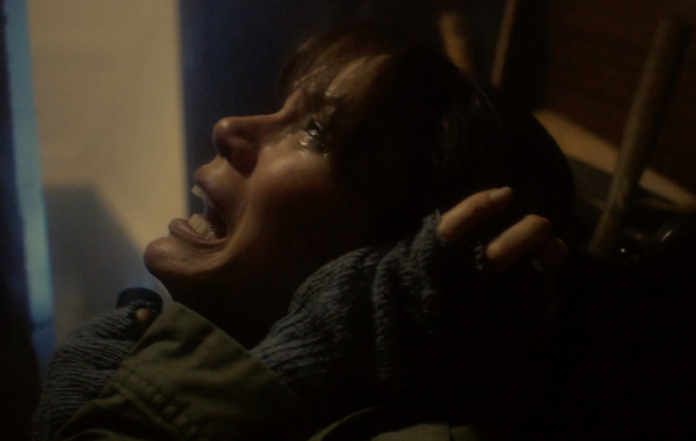 Haunting of the Mary Celeste is an impressive effort from relatively new director Shana Betz. In the past, she has directed two feature films that are more action-comedy oriented, but with her latest, she takes her talents to the dreary seas and presents real and tangible horror with great direction on her behalf, even if the story feels tremendously short by the time it’s all over.

In this film, we follow a woman named Rachel (Emily Swallow) who is a researcher that sets out on an expedition with her fellow crew members after learning of a strange and creepy disappearance out on the sea. Many people in the area believe the disappearance is linked to supernatural causes, but the crew isn’t too sure of that. To try to prove everybody wrong and relax the townsfolk, Rachel and her crew sail out to sea only to find themselves stuck in a horrifying situation with no help in sight.

It’s honestly a fairly interesting concept and, if done right, could make for a genuinely fun and diverting thriller. Gratefully, the movie does have its fair share of terrific moments throughout. Seeing as how this is a horror film, you would expect there to be at least a handful of bloody kills throughout. Rest assured, there is, and they are all done excellently.

All of this is made more impressive because Haunting of the Mary Celeste feels like it has a relatively small budget. Some people like to turn their backs on smaller films like this because they feel that it will come across as cheap and not as exciting or fancy as a Hollywood production, but films like this come along to prove that not every project has to have big bucks behind it to be entertaining.

Unfortunately though, as I mentioned earlier, this movie ends way too soon. With a running time of a mere seventy-four minutes including credits, sometimes it feels like the incidents that occur are happening too late. By the time the real fun starts to happen, the film is already half done and it doesn’t really have anywhere to go sadly.

Another problem is that the lead characters were ones that were not all that interesting and they’re not ones that you are given any reason to care about either. They are just researchers out at sea trying to prove the townspeople wrong and it’s basically the extent of their character development.

Gratefully though, the performances from all of the actors on screen are terrific. In particular, Emily Swallow delivers a genuinely great performance as Rachel. She feels unhinged and intimidating the entire time and is extremely convincing in virtually every scene. I just couldn’t help but wish this performance was in a better movie.

If the film had put forth a stronger effort to make us care for these lead characters, the film as a whole could have been significantly better. To be honest, though, this is not an awful movie whatsoever. I had a decent enough time while watching the film but I couldn’t help but feel like there could have been some major improvements along the way. If you are looking for a fun way to spend seventy minutes, this will more than likely do the trick thanks to its excellent scenes of bloody thrills and its great atmosphere. But those looking for an engrossing character-driven horror film will be incredibly disappointed.

Review: ‘Shaft’, It’s His Duty To Please Our…

‘Shaft’ NSFW Trailer: Shaft Is Back Fully-Armed With Dick Jokes And F-Bombs

‘Shaft’ Trailer: Three Generations Of Cool Team Up For The First Time