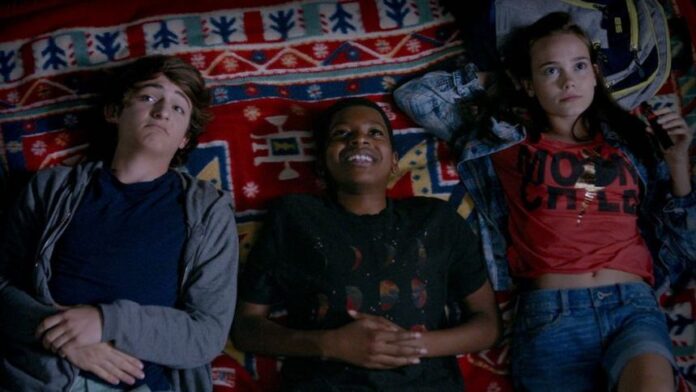 “A group of friends start their freshmen year at a tough public high school when their friend Cassie disappears in West Baltimore. With the police unable, or unwilling, to find her, the young friends take it upon themselves to find out what happened to her, undertaking a harrowing journey that will change them all.”

The concept of Ben Hickernell’s What We Found certainly isn’t the most original thing in the world. Throughout the years, we have seen several stories like this one told, many of them being quite good. I was hoping that this film was going to be a welcomed addition to that pile, but unfortunately, it falls rather short even if it isn’t the worst movie out there right now.

At times, the film can play out like a somewhat grittier episode of the first season of Stranger Things with these kids looking for their missing friend. In Stranger Things, the world felt extremely dirty and grimy and you really got the sense that young Will Byers was in big trouble wherever he was. Here though, the world doesn’t give off that same atmosphere. Surprisingly enough, there were a few instances in which the tension doesn’t feel present which was massively disappointing.

Don’t get me wrong though – the film definitely has its moments of tension and intrigue, and when those moments happen, they’re genuinely great. The first act is quite slow to get through. It’s essentially the set-up act where we get to learn a little bit more about our lead characters before going on a journey with them. Once this first act gets out of the way and we move into the second, What We Found becomes exceptionally more entertaining, even if the storytelling can get a little messy along the way.

That’s probably the biggest issue that this movie has; it’s just all over the place. When we get small answers along the way, it is certainly rewarding and satisfying, but the way this story was told as a whole was somewhat jumbled and it could have been done a lot better.

The best part about the picture as a whole was the performances from the entire cast. They were all genuinely terrific in their respective roles and each one of them brought a different level of emotion to their characters. Elizabeth Mitchell thankfully gets quite a bit to do with the role of Captain Hilman, who always feels intimidating and powerful. She will do whatever it takes to get the job done and get it done right.

Also fantastic in the film are the child actors. Sometimes in movies, child actors stick out like sore thumbs because they simply don’t have as much experience as adults do. They can oftentimes feel unfortunately wooden, but here, that is not the case. Oona Laurence (Pete’s Dragon, The Beguiled) is one of the biggest emerging names in the industry right now, and with her performance here, it’s not hard to see why. She delivers an emotionally strong and captivating performance and one that stands tall with the other cast members.

At the end of the day though, What We Found has one too many problems for me to say it was an enjoyable experience in the grand scheme of things. Don’t get me wrong, there are absolutely things to appreciate about it. All of the performances are remarkably strong, there are some moments of genuine intrigue and mystery and it occasionally feels rewarding, but the storytelling was far too scattered to get on board with and it sadly comes across as stale and unoriginal. They could have shaken things up and created a brand new twist on the familiar storyline, but instead, they went down the traditional route which sometimes isn’t a bad thing, but here, it was.

Review: ‘The Killing Of Two Lovers’