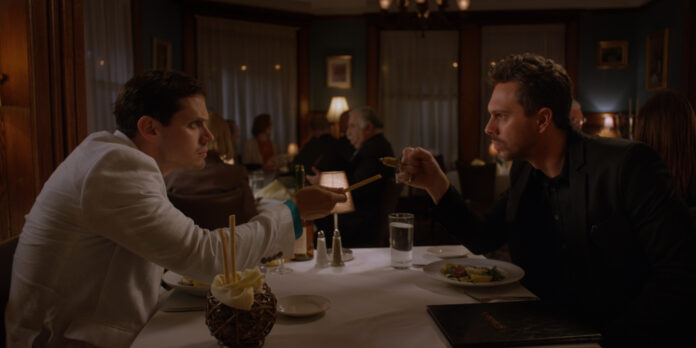 A comedy where our main character learns that imitation may not be the sincerest form of flattery when he is befriended by a younger neighbor on the town’s newspaper staff. The Kid, who is married but childless, knows no one in town, whereas The Narrator knows everyone in town. As times goes on, the Narrator begins to wonder about the Kid’s Wife and what kind of woman could marry a guy like this. Perhaps she just might be the woman for him.

One of the biggest, if not the biggest thing a comedy should do, is make you laugh, or at the very least chuckle. As a viewer, we are expected to find some form of amusement from the story that is being presented before us, and a lot of the time we laugh in a comedy is because of the situation that our protagonists get themselves into.

While Thomas F. Mazziotti’s new feature The Mimic isn’t the funniest film out there, it is nevertheless a smoothly written and often humorous movie that is told with immense skill, which is made all the more impressive when you stop and think that this is Mazziotti’s third feature.

A large portion as to why this movie works as well as it does is due to the narrator that we hear throughout. He is often very interesting and soothing to listen to and he does get a lot of funny and amusing things to say. The humor mostly works here although it never cuts above surface level stuff. There really isn’t any jokes in this movie that will make most people laugh out loud or anything like that.

Plus, as entertaining as it often is to listen to the narrator, it did, at times, feel like a simple way for the filmmakers to use expository dialogue without many people complaining. Without the narrator involved, this movie quite simply wouldn’t exist. The story needs him in it, yet he often speaks a ton of information towards the audience, and it would have been nice if we had been presented with a bit more visual storytelling.

But something that is to be appreciated here is the performances all across the board. Whether it’s Thomas Sadoski as the voice of The Narrator, Jake Robinson as The Kid, or Gina Gershon as Paula, they are all giving top notch performances and it often feels as if you are watching A-list professionals at the top of their game. There truthfully isn’t a weak link among the entire cast, which was such a delight.

Because these actors are doing such terrific jobs in their roles, the movie as a whole feels remarkably natural. As goofy and over-the-top as it can get sometimes, a large portion of the movie is incredibly grounded and real. It’s also a gratefully inviting experience thanks to the excellent camerawork by Tim Gillis and the uplifting and spectacular editing from Benjamin Cox and Kala Mandrake.

At the end of the day, this is a film that does have some great things to offer, even if it isn’t the most hilarious and rewatchable film out there. If you are looking for a movie that contains some great performances with some stellar technical aspects, this is more than likely going to win you over. It’s funny, yes, but it’s not the greatest strength on display here. The greatest strength is the sense of style it has accompanied with the wonderful acting.

The Mimic isn’t as amusing and funny as it could have been, but it makes up for the lack of laughs with terrific performances and stellar technical elements.