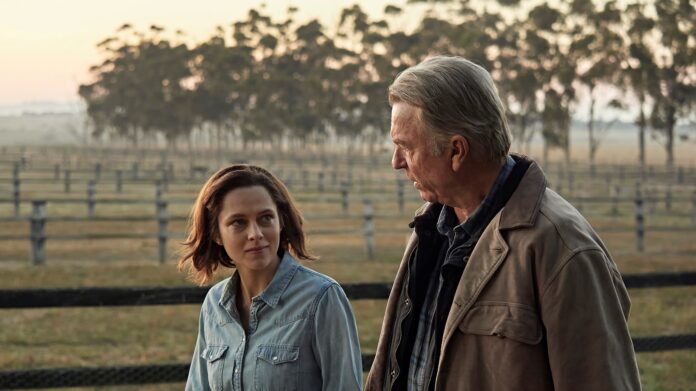 As a little girl, Michelle Payne (Teresa Palmer) dreams of the impossible: winning the Melbourne Cup – horse-racing’s toughest two-mile race. The youngest of 10 children, Michelle is raised by single father Paddy (Sam Neill). She leaves school at 15 to become a jockey and after early failures she finds her feet, but a family tragedy, followed by her own near-fatal horse fall all but ends the dream. But with the love of her dad and her brother Stevie, Michelle will not give up. Against all the medical advice and the protests of her siblings, she rides on and meets the Prince of Penzance. Together they overcome impossible odds for a shot at the dream: a ride in the 2015 Melbourne Cup, at odds of 100 to 1.

Sports movies like this are ones that are often avoided by a lot of audiences simply because they can fall under a ton of genre-conventional tropes. It’s completely understandable. Although movies such as Miracle and Hoosiers are typically regarded as quite good, most people can agree that they are fairly predictable.

These films usually have a ton of the same elements in them, with one of the biggest ones being a long, drawn-out montage sequence. There’s usually a point in the middle where our lead protagonists/sports team is losing confidence and things aren’t looking too great for them at the moment. Then, they somehow find a way to come back and find their mojo and have a shot at winning it all.

Rachel Griffiths’ Ride Like a Girl is similar to those other movies in that it does have sequences like this and is mostly predictable in the long run. But, along the way, there is plenty of fun to be had to prevent this from being completely disposable.

A large portion as to why this movie works as well as it does is due to the lead performance by Teresa Palmer. She totally disappears into the role of Michelle Payne and is incredibly charismatic and charming. We always know what her ambitions are, and seeing her drive was greatly inspiring, even if you know how the real-life story plays out. There’s always something immensely uplifting about watching somebody trying to accomplish their goals when they’re so passionate about it and to say that Payne is passionate would be an understatement.

Ever since she was little, she has loved horses and has wanted to enter a horse race. She feels a deep connection to the sport and wants to prove every naysayer wrong. While the story that plays out is quite predictable and is nothing we haven’t seen before, it is still an entertaining journey due to the performances from the main cast and the excellent character development and arcs that we get. Another element that boosted the film as a whole was the cinematography by Martin McGrath and the musical score by David Hirschfelder. They compliment each other beautifully making for one great technical achievement.

If there is something big to complain about here, it would have to be the first act. It is mainly a set-up act that shows us what Michelle was like when she was younger, and we spend a lot of time getting to learn about her past. While this is absolutely necessary, it does, unfortunately, make the first portion of the movie a little boring to watch. Once the second act comes into play, the entertainment value picks up immensely.

All of this leads us to a third act that was remarkably crowd-pleasing in all the right ways. The direction the film took was highly satisfying and is sure to put a smile on every viewer’s face. It’s ultimately a tale of how far someone is willing to go to accomplish their goals and see their dreams become a reality. While it isn’t the most original outing there is, it’s nevertheless heart-warming and gleefully fun.

Ride Like a Girl may fall into typical genre tropes, but the performances across the board and the heart-warming story are too excellent to ignore.