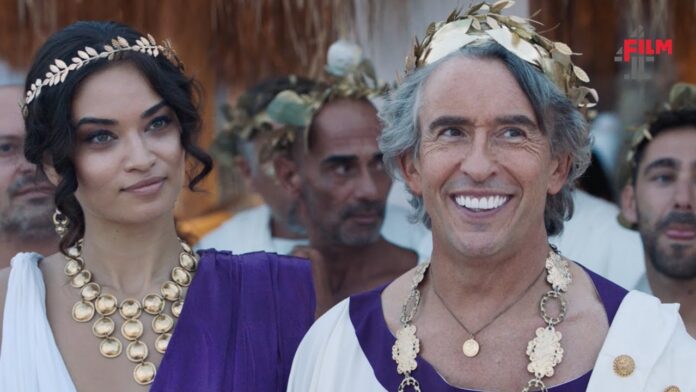 Greed tells the story of self-made British billionaire Sir Richard McCreadie (Steve Coogan), whose retail empire is in crisis. For 30 years he has ruled the world of retail fashion, bringing the high street to the catwalk and the catwalk to the high street. But after a damaging public inquiry, his image is tarnished. To save his reputation, he decides to bounce back with a highly publicised and extravagant party celebrating his 60th birthday on the Greek island of Mykonos.

Michael Winterbottom is a director that has plenty of great ideas up his sleeve, and has impressed me on numerous occasions with his previous films, especially The Trip series, The Emperor’s New Clothes, and Everyday. My family has always greatly enjoyed The Trip the most, though. It’s kind of a favorite in our household.

Since I do quite enjoy his filmography, I was excited to see what his latest feature Greed would have to offer. Something that is instantly noticeable about Winterbottom’s movies is that a lot of them star Steve Coogan in the leading role. It’s not hard to see why, either. He is an actor with a great amount of range and can pull off a large variety of characters. While Greed is not one of my all-time favorite Winterbottom movies, Coogan’s portrayal of eccentric billionaire Sir Richard McCreadie is among one of his most wild and devilishly entertaining to date.

Right from the opening few scenes alone, we can tell that McCreadie is a highly cocky and greedy man. A lot of people even refer to him as “Greedy McCreadie”. He is always trying to find a way to make money and he doesn’t want to give any of it away. His money is his money, and nobody else’s. Watching a character like this would usually be infuriating because they are just so annoying and it is hard to root for somebody like that. But with a funny and likable actor portraying said character, it becomes easier to sit back and laugh at all the insane things that he does.

This is a satire film, and that is nothing new or original. How you execute any film in any given genre is what makes it new or original. Winterbottom’s script is quite good for the most part, although it does suffer from some issues. One of the biggest issues with it is that it does somewhat feel like other movies. Not necessarily the story, but how it was written. Some parts of it reminded me of Jorma Taccone and Akiva Schaffer’s Popstar: Never Stop Never Stopping and the way that movie portrayed its protagonist.

Sometimes, the screenplay is a bit uneven. The first act takes a while to get going, and a lot of it is because it is almost all setup. We ease into the life of McCreadie and we see his life play out starting from when he was in school. I appreciated the fact that we got to see how this larger than life presence came to be, but there was just too much exposition in the bunch.

Similarly, a lot of the humor did not land during that first act. Some jokes would go by and fall completely flat. Gratefully though, the humor and really, the movie as a whole, does improve after a rocky first act. From that point onward, it becomes a massively entertaining satire that has a lot to say.

It’s a film that talks about social class and how our lead protagonist handles his wealth and it takes us on a journey with this man as we get to learn more about him. Like I said, it is nowhere near perfect. It’s not a satire that is as good as other satires such as The Death of Stalin or Jojo Rabbit or anything like that. But Greed is incredibly different from those movies. It’s a comedy that has some dramatic elements sprinkled throughout, and also doubles as a commentary on social class.

It is too long, especially the first act, some of the jokes don’t work that well early on, and some of the characters (except for McCreadie) don’t get too much to do. Yes, it does improve later on which is a great thing, I just wish that the preceding parts of the movie were just as entertaining.

But perhaps my favorite aspect of Greed is none other than Coogan as the lead protagonist. He is such an interesting character to follow here, as we get to see how cocky this man truly is. Watching his life play out was a series of baffling moments but in all the right ways. Seeing him earn his money and interact with other people around him was a treat. The film does have its problems, but this is an amusing enough movie that doesn’t always work in its execution, but when it does get going, it never lets up.

Greed‘s satirical and wacky script feels bizarre in the first act, but it improves later on and offers some humorous moments and an entertaining performance from Steve Coogan.